It’s easy to take for granted the ability to feel almost instant relief from scorching heat with the push of a button as American Southern cities are experiencing some of the hottest temperatures ever recorded. 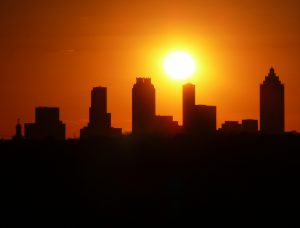 When Willis Carrier created the first air-conditioning (AC) unit at the turn of the 20th century, the objective wasn’t to keep offices and homes cool on blistering hot days. The device, rather, became popular with industries from tobacco to textiles to cotton. It was not until some several years later that human comfort came to be an essential use beginning with air-conditioned cinemas and then in department stores.

Though, it wasn’t until the start of World War II that homes in Southern U.S. cities started using AC system. And one in every 22 U.S. houses had AC by 1955. According to the historian Raymond Arsenault, that statistics was about 1 in 10 in the South. Hence, a lot of these Southern cities experienced a significant population increase since this upsurge in air conditioning use.

In looking at the U.S. metro areas with a population of more than 1 million people, which have historically been the hottest (above 65 degrees) based on the sum of cooling degree days per annum, between 1971-2000, six big cities in the South had a minimum average of 3,000 cooling degree days. Additionally, upon compared the 1940 metro population (when available) to the metro population in 2010, it turns out that from the time just before ACs became popular in the South to today, population increase in the region has skyrocketed. It then raises the question: would these hot Southern cities existed at all, at least in their present form, if the air conditioning did not come into being?

The AC played a significant role in influencing the Southern metros living and lifestyle in the United States, and air conditioned bigger cities will eventually shape the climate of the planet.

Sadly, we’ll have to take the positive (increased comfort) with the negative. That greater demand will also have a significant impact on energy use in these global cities. More innovation in extra energy efficient AC units might play a role in lessening power consumption demand, but as the Times identified, “gasses from ACs contribute to global warming a thousandfold more than does carbon dioxide.”